Well our last day in Paris was a fairly relaxing day. We walked around the Latin Quarter again and manage to stop in a few shops along the way. Nothing purchased.

We proceeded to the Louvre again and I was tempted to go in again to catch some of the other sites we didn’t see, but alas I was worried Russ didn’t want to go. Though on our return I found out he did and didn’t want to ask me for the same reason as I didn’t ask him. Oh well.

We walked in some shops along the way home as I was trying to find a nice casual blazer to purchase, but alas there was nothing in my size. I guess since most Parisians are small and tiny, they don’t need really big clothes like they have back in North America 🙂 Now let’s see, an XXL shirt which I thought was nice was really a SMALL in my books. I couldn’t buy a thing. OH well, this might be a reason to loose some weight. 😀

We then went home and relaxed before one last big dinner out. The dinner was fantastic and headed home to pack for the trip back home. Russ had saved a bottle of champagne from the other day and we toasted our last night in Paris. It was actually fun.

The trip back home to Vancouver was long. Our flight from Paris to Toronto was delayed on the tar mat for about 1/2 hour as the airport was busy and we had to wait for our turn to leave. This started to worry me a little as we only had 2 hours in Toronto, and that would cut into my visit with my sister Gladys in Toronto. This made the 8 hour flight feel longer for me as I couldn’t sleep and kept worrying about it. To my surprise the plane landed on time and we were able to have a short coffee with my sister and niece Amanda. It was great to see them as it has been over a year since we last saw each other. You begin to realize how much you miss your family when you are not in contact with them for a long period of time.

After our coffee we walked back through security and as we approached our gate, the plane has begun to be boarded. The trip from Toronto to Vancouver was more relaxing. I manage to sleep for abit. We landed in Vancouver on Thursday night to a typical Vancouver weather and finally got home. Ahhh HOME! It was great to sleep in our home again. 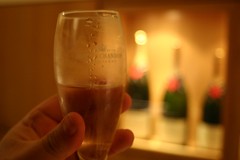 Well we didn’t get much sleep last night as we were worried we wouldn’t get up and miss our tour today. The plan is to at least sleep on the bus.

We made it to the tour operator’s office in good time and waited to board our bus. The bus had a tour in 3 languages, English, Spanish and Japanese. I was impressed on each translator how great they spoke their languages and was more impressed by a white person speaking Japanese.

Our tour began in the city of Reims where we stopped off for a tour of the “caves” of one of Marylin Manroe’s favourite champagne – Piper Heidsnick. Supposedly one of the many champagnes used in the motion pictures as well. The tour of the caves felt like we were in a Dysney ride. We boarded a little card and were whisked away through the underground of the complex and were given the sites and sounds through a pre-recorded audio. Alittle shlacky, but the champagne tasted great after the end!

We were then taken to the Cathedral Reims. This is were many of France’s Kings have been crowned. The Cathedral was going through some very extensive renovations in and around the site that it was hard to hear our tour guide at times. Inside the Catherdral you can see where the Germans had bombed this during World War I. The architeture was amazing as it is in the gothic style. Walking around you can feel the history that was there. At one point our tour guide pointed out a chair where Joan of Arc sat during one crowning. She then pointed out a statue of Joan of Arc made out of Ivory. Now the eery thing is that the face is always clean while the rest of the statue shows it’s age.

We then proceeded on our tour of the Champagne region to Moet and Chandon’s estate. This is the champagne that Nepolean loved. It was also interesting to note, during our guided tour, that is also where Dom Perignon is made. I even got to hold a bottle of it during out tour, a bottle that still was being aged 🙂

This tour was more personal as we had a person tour guide take us through the underground caves and learn more of the history behind Moet and Chandon champagne. Truely delicious in my books!

We then headed back to Paris where I crashed of pure exhaustion.

Tomorrow will be another grand adventure as it will be our last official day here in Paris! 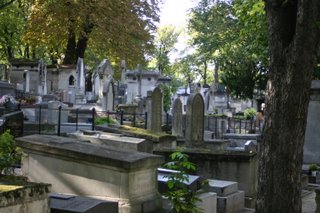 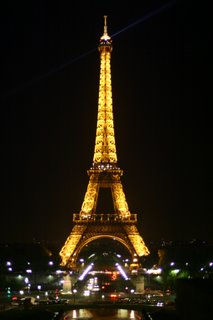 Today we slept in after having 2 full days of walking. Our feet have been so tired, we decided that today would be the day to just do things leisurely.

We ended up leaving the condo at 1pm and just walked over to the Latin Quarter to do a little bit of shopping. Alas since it was Sunday, most of the shops were closed. But first we stopped off for a bite to eat at a Bar/Club/Restaurant. We had their buffet brunch and then continued on our way to the Latin Quarter.

After walking around for a bit, we stopped by a a cafe shop and sat outside with our 15 Euro glasses of coke and beer and just people watched for a bit.

We got back up and started to make our way through the maze of streets and alley ways at one point getting a little lost and disoriented. At that point the map came out to see exactly where we were, which wasn’t too far off a main street. We slowly began to make our way back home where we rested.

As the night drew nearer, Russ got me up and said it was time for me to get some nighttime shots I have been wanting to get. We hopped on the Metro for a 2 hour tour stopping at the famous Moulin Rouge (which to be honest wasn’t that spectacular on the outside), the Arc de Triumph, and the infamous Eiffel Tower. I think I got a couple of great shots and was happy with that quick trip.

At this point we were getting a little hungry and stopped in at a restaurant for a late bite to eat. Thankfully there was one open at midnight and we manage to get a quick bite just before heading home for the night. 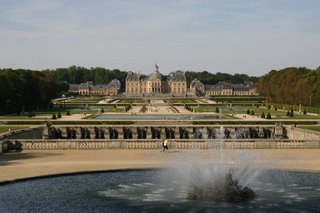 Today we ventured a little further out of the city to a little town known as Melun. It was a fun 40 minute train ride outside the city. It was fun to see the city slowly change from industrial, to rural, to country side.

From there we waited about an hour for the bus to show up to take us to the Chateau Vaux le Vicomte. This was the place that Louis XIV wanted to out do, and he did with Varsaille. This was a little of a disappointment having seen Varsaille first, but still a spectacular building and grounds. They were even getting ready for an Opera production on the grounds with the Chateau as the back drop. Ahhh the French! Alas this did not really allow me to take pictures of the front of the Chateau.

The highlight was definitely being able to walk up to the dome of the Chateau and an amazing view of the grounds. The gardens were spectacular and we were treated this time to the fountain show (every second Saturday they have the fountains on for 3 hours). These fountains are gravity controlled by the resevoir that is on the grounds. Truely amazing.

We of course had to walk the grounds and I was taken back by all the sites. I pictured how it must have felt back then. This was their entertainment, walking the grounds each day and stopping every so often to admire the sounds of the water, the beauty of the fountains themselves and the gardens.

After 3 hours of walking the grounds it was time to get the last bus back to the train station and work our way back to our temporary home.

This has definitely been 2 full days of walking and walking and more walking. My feet are aching and I need a break tomorrow!