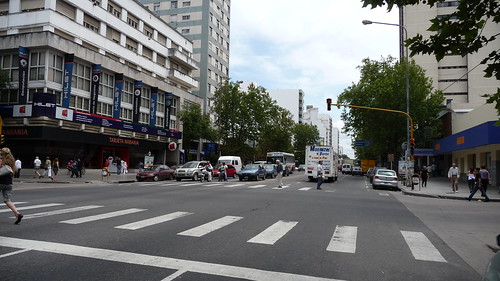 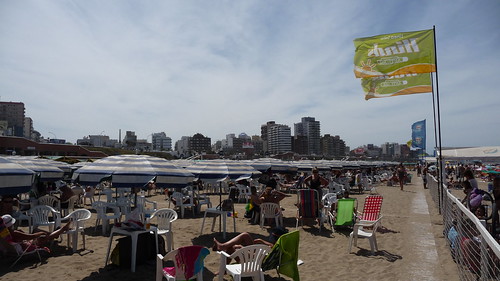 Finally in Argentina and even though my right hear still hasn’t popped from the pressure of the plane, I’m still enjoying the vacation so far.

When we landed in Buenos Aires, we had hoped that my father would be waiting for us to drive us to my aunt’s home, but alas that wasn’t the case. Instead my mother paid for our ride into the city via a “Reme” (a combination of taxi and private chauffeur).

At my aunts house we were greeted by my father and his two sisters (my tia Tita and tia Nelly). These two sisters are very inseparable and always fun to see. I quickly got myself settled and took my long awaited shower (after 20 hours of flight it’s time to have a routine again).

Russ and I began to explore the neighbourhood a bit and walked around. This area alas has begun to get a bad reputation as being a harsh neighbourhood, but at the sametime people take pride in their homes and it shows. Homes are all gated, but they decorate them with a passion that I have not seen in sometime. Some homes have a front yard where they have manacured lawns, have flowers and some banana palms. Also the homes always have a centre court yard where most of the family usually gets together and is the heart of the home.

We didn’t stay much at my aunts home as my father later got us tickets on a bus to Mar Del Plata (a beach resort town just south of Buenos Aires). The bus was a double decker and we had to be at the bus terminal before 1am where the bus was leaving. When we arrived at the bus terminal I was shocked at the amount of people that were there at that hour of the morning and the amount of buses that where heading down to Mar Del Plata.  I didn’t sleep very well that trip down on the bus. My chair would not recline properly and there were times on the route where I felt the bus was going to tip over. My father later let me know that they have been known to tip over (thanks Dad!)

We finally arrived in Mar Del Plata at 6:30am and we got to our appartment shortly after that. As not one of us had eaten, we all went out for breakfast. Argentinian’s are not very big on breakfast as it usually consists of coffee and pasteries.

After breakfast we walked around a bit to get orientated and discovered that the beach is only a few short blocks from the apartment. The beach we were on is known at the most popular beach on Mar Del Plata known as Perla Norte. They have areas broken down where you can rent a cabana, rent a table with umbrella and a public area which is a free for all. The cost to rent a cabana is $100 pesos ($33 US), a table and umbrella is $90 pesos ($30US). Since we wanted to have a secure place on the beach we rented the umbrella and table for the day. 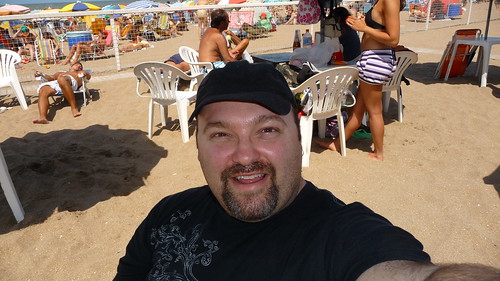 We spent time on the beach and just relaxed. It was interesting to see that most Argentinians don’t head to the beach until after 12 noon and the beach becomes fully packed around 3pm that day. As this is prime holiday season here, the beaches really fill up.

Later that evening we went out for an authentic Argentinian bbq dinner (or parilla).  We ordered the dinner for 5 which consisted of several different cuts of beet, chicken and pork that were brought to our table. A truly amazing tasty treat that we could not fully finish. We walked around the town, which now could be called a city as amount of people and the streets are bussling all the time.

The only problem that we are finding is that WiFi is very hard to find around here. We did manage to find a restaurant that offers free WiFi and we might just end up going there more often 😉

I have to say I am looking forward to a good nights sleep as I really haven’t had one since Friday night.

Tomorrow is the day I embark on my 2 week vacation to Buenos Aires Argentina. Yet I am at home nursing a cold that will no doubt be a burden when I fly tomorrow.

This has been a trip I’ve been wanting for sometime as I just haven’t been able to go before. It will be wonderful to see my family again and to explore the many offerings the capital city has to offer.

The last time I had gone was about 10 years ago during the Easter holiday. I had planned to visit all my relatives, but during that time my grandmother fell and broke her hip bone.  It was hard to see and deal with during that time, as she never really recovered and saddly passed away a few months after that.

This time around I hope to visit the family members I didn’t get a chance to visit the last time. I had hoped to have gotten together with my Uncle Tito, but saddly he passed away last year.

It will be a somber trip, but I know I wll have some fun, after all Russ is joining me on this trip. It is Russ’ first time to South America and he is looking forward to exploring the Paris of South America.

I hope to blog during my visit and let everyone know about several of the wonderful neighbourhoods.