Do you want to get your hands on the new Samsung Galaxy S Fascinate 4G from Telus? Do you use Gowalla? Well on Thursday May 12,2011, Samsung will be giving away 10 Galaxy S Fascinate 4G smartphones in Toronto, Montreal, Calgary and Vancouver at a secret location in each city. All you have to do is be one of the first 10 people to check-in via Gowalla at the mystery Telus store location at the city. If you are one of the lucky 10 people, you will get a notification telling you that you’ve won.

For Vancouver, I’ve been told the secret location. You can visit the Telus kiosk in Pacific Centre Mall starting at 10am tomorrow.

Good luck and have fun! 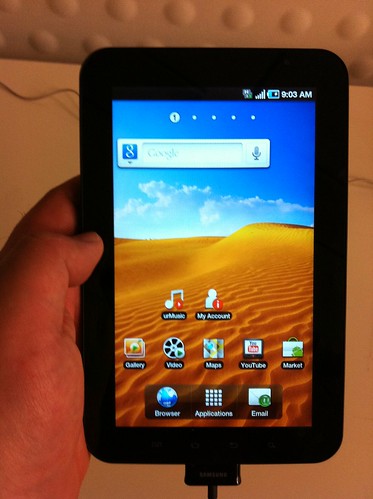 These past couple of weeks I’ve been graciously allowed to play with the Samsung Galaxy Tab.

Like the Samsung Galaxy S Captivate I reviewed in December, the Galaxy Tab operates with Android 2.2 and pretty much had the same feel and function as the phone, except with the a 7 inch screen. The Tab comes two cameras, 3.0 megapixel rear camera with LED flash and 1.3 megapixel front facing camera, HD video recording with rear camera, 1 Ghz processor, standard 16/32 Gb storage with an additionally microSD slot for up to 32 Gb more of storage, wifi and 3G capabilities. All the bells and whistles you would want in a tablet.

The screen was very bright and detailed. While surfing the web the tab responded very well and all images appeared great. I found that viewing a website in landscape was much easier on my eyes than in portrait mode. Even with zooming while in portrait I didn’t find viewing websites as enjoyable. I did find the Flash support to be lacking on some sites with loading speeds taking sometime to load. Granted I don’t get Flash support at all on the iPad.

The keyboard, as with the Galaxy Captivate, was very responsive and I did enjoy the slight vibration as you typed. I found it hard typing in landscape mode as the keys were very far from each other to use your thumbs, but still too tiny to try to type as you would with a standard keyboard. My fastest typing was in portrait mode.

Though I truly liked the camera on the Galaxy Captivate, I didn’t enjoy using it on the Galaxy Tab. I found it a bit cumbersome and found the image quality to be grainier than I would have hoped. I even found it awkward using the tab to take photos and video, it just didn’t feel comfortable or “natural”. I will say the same the thing about the iPad 2. Even though we all wanted tablets to have cameras, I do find that I’m not even using them at all, but it’s great to have in the event you need one.

I did find the placement of the ON/OFF button to be difficult. I would rather have it be located on the top of the Tab than on the side as I found myself accidentally hitting it from time to time while reading and turning off the screen. Truly annoying as it’s also located close to the volume control.

I truly enjoyed using the Tab as an e-reader. Even though it’s back-lit like the iPad, i found it easier to hold and flip through pages. I was using the Amazon Kindle app for all my reading and it seemed to function better than the iPad version for me.

The Apps were disappointing for me. Firstly some of the Apps that are available for free on the Apple version are paid version for Android. I don’t understand why there was such a difference. I know this isn’t Samsung’s doing, but it really is a pain. Secondly the Apps weren’t different from the phone to tab versions. I thought they could have benefited from a larger screen. This might be due to Andriod itself and I do hope that when Andriod 3.0 (aka Honeycomb) comes out, this will truly help the tablet market differentiate itself from the smartphone market. As I see it right now the Tab just feels like a larger size Captivate with the same functionality.

Cost wise, the Tab is available on Bell and Rogers for a 3 year contract at $200, and without a contract on Bell it’s $400 yet on Rogers the no contract price is $625.

The other day I saw one of my good friend tweet about Blogsy and thought I would give it a look.

I was looking for an easy software where I could easily create a blog post without having to know any HTML codes (god forbid I would have to learn how to code) to use on the iPad. The WordPress App is ok for being able to quickly approve comments or quickly update a post, but I didn’t find the interface all that great when compared to the PC/MAC. I guess I’m just so use to using the WYSIWYG for quickly editing and writing my blog posts.

This App is great as it uses the iPad’s touch capabilities for easily dropping in links, photos and videos as you can see by this video.

With this tool I’ll be able to easily update and create blogs on the go without having to bring my MacBook Pro along. After all this post was created by using Blogsy.

Well the day has finally arrived for us in Canada. The iPad 2 is being launched today at 5pm with some fan fare, and by fan I do mean fan. Already this morning walking to work the line up outside the Apple Store downtown was over 60 people. Some have been in line since midnight hoping to be one of the first few people to get their hands on it.

The iPad 2 was already launched on March 11th in the US with most stores selling out and demand for the new toy being fierce. Some have given up walking into a retail store to get their iPad and have resorted to just ordering it online from the Apple website.

I was debating whether I would line up today. Of course I had to work and thought that after work I would just see how the line up was and decide there. Last night after Twestival, I realized that I had a chiropractor appointment at 4:30pm and couldn’t wait in line for the device. So at 1am this morning, when the online Apple store opened up, I ordered myself the 64Gb White iPad, with the green smart cover and camera kit.

So in about 4 weeks time I should have one delivered directly to my door without the worry of waiting in line and possibly being disappointed that they run out before I get to the front. I’ll probably be jealous of all those that will get one, or currently have one from their trips to the US, but I think I made the right decision. I’ve waited for over a year as it is to get one and after playing with Russ’ iPad for the past few months I know it will be a welcome addition to my growing gadgets.

Are you tired of the cold rainy weather in Vancouver? Are you tired of the lack of sun and want to escape to warmer climates? Well the Weather Network wants to give you a sunny all inclusive vacation to the Mayan Riviera for 2 courtesy of TakeOffEh.com. All you have to do to win this lovely vacation is to make a Weather Ad lasting 30 seconds at MyWeatherAd.com. 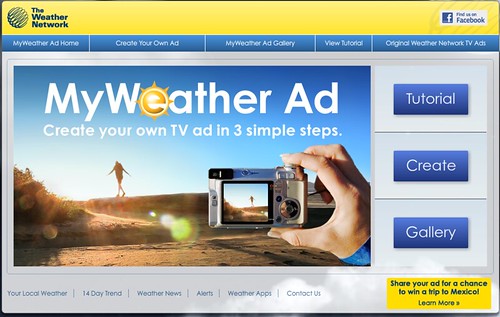 Show Canada how creative you can be and create as many ads as you like, but you have until March 21st, 2011 to enter and get your ads “Liked”.