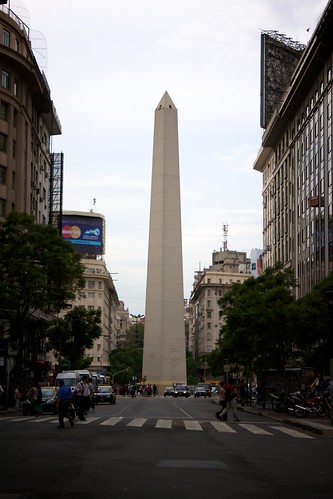 Russ had to be up early and at his Spanish school Coined, by 8am and I went along for the trip. While he was in getting assessed on his Spanish skills I sat around the lounge area and surfed the net for a bit and tried to plan my day. When Russ finally got out and had time to spare we headed to the coffee shop across the school for a much needed coffee.

It was great to just sit there and just watch people hurry along on their way to work. Buenos Aires is a huge city, very metropolitan, and everyone is busy trying to make their living, but are very laid back and willing to just talk with someone along the way. It’s very refreshing to see.

When Russ headed back into class, as his afternoon is fairly booked, I headed out to explore and get a SIM card for our phone. I went to several locations, Movistar and Claro, but no one seemed to be able to sell me a SIM card. I thought it was very odd. I even went to one of the Claro’s main stores and they told me to go to another store up the street, where they of course told me they didn’t sell them. I was beginning to think that no one wanted my money.

As I walked along the street I saw a convenience store that was advertising pay as you go cards, when I asked the clerk if they sold the SIM cards, she was quick to say yes. WOW score! She asked me which provider I wanted to try out and since I’ve heard that Movistar was great for data, I tried one of their chip. Alas I wasn’t able to get a signal from them. Actually even on roaming the Movistar signal is poor in my area of Buenos Aires, so I opted to try out a Claro SIM. That worked perfectly and it only cost me $10 pesos (about $3.50 CDN). I then purchased a $50 peso pay card and now we are hooked up with a cell phone that works here. I’m not sure how long it will last at the rate since we are charged per call and internet use. Time will tell 🙂

I met up with Russ at the end of his classes and we just relaxed for a bit before heading back out on the streets to check the sites out. We are close to two main pedestrian streets – Florida and Lavalle, which a night time spring to life with merchants selling everything. It’s also fun to walk along these streets as you get to see some great street performers do their best to have you part with  your money 🙂

We were fortunate enough to see a quick tango show which I thought was interesting. After the male/female pair finished, the two male dancers began their very own tango. I have heard that the tango began with men dancing together, but have never seen it before in action. It was fun to see and the audience really got enjoy a great free tango show.